With the presidential election drawing closer and closer, both candidates are aggressively trying to widen their voting base by any means available. Social media, town halls, and advertisements are a few ways Donald Trump and Joe Biden are attempting to lure potential voters to the polls.

Normally, during an election year, volatility increases while equities trade in a tight range until a winner has been announced, but the year of 2020 is anything but normal. 2020 has been a whirlwind of emotions that could potentially throw some last minute curveballs our way. With a few different potential outcomes in the election, the most-likely to happen is a contested election. This is one of those rare things that Wall Street and Main Street seem to agree on. A contested election would look something like this:

These may seem like dystopian predictions, but almost everyone agrees that this election is going to be a wild ride. No one would be surprised if it came down to a fist-fight between Trump and Biden to decide the winner.

Also, if you wouldn’t mind, we’re conducting research related to the upcoming election and would love it if you took the survey linked below.
Take Our Presidential Election Survey Here!

Now onto the newsletter… 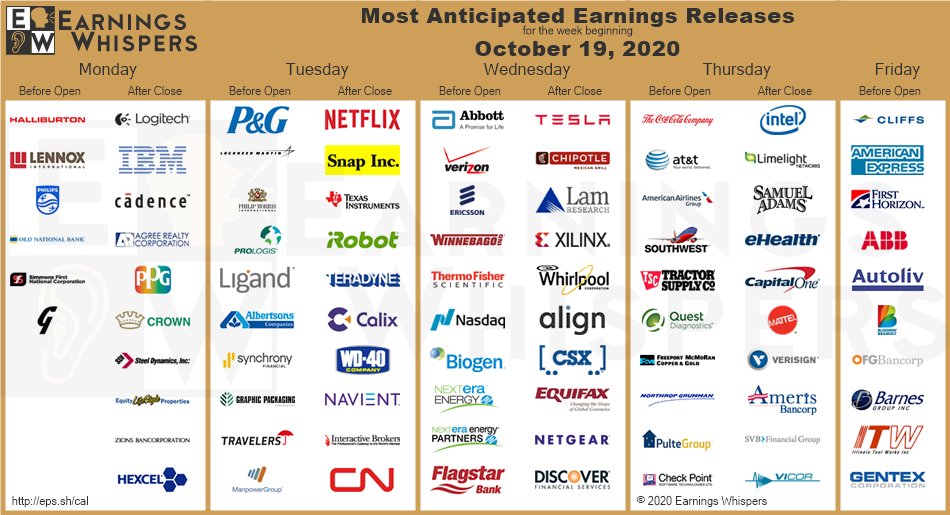 In terms of economic data release activity, not a lot of data will be released this coming week.

The normal Initial Jobless Claims and Existing Home Sales reports will be released on Thursday providing a in-depth view into how the U.S. economy faired during the month of September.

Third quarter (July through September) GDP data will be released next Thursday at 8:30 EST. This is one of the few economic indicators that can have a massive impact on markets across the globe, as GDP tells us how productive society has been over the past three months. The trading day can be determined solely by this piece of information (bullish or bearish), so be careful if we either beat big or miss big.

All charts have been aggregated into one section for easier viewing. The ticker and timeframe have been color-coded to reference the specific contributor who created the chart analysis.

These charts are intended to help you to become a better trader, so don’t just take every trade you see and expect to make money. Do you own due diligence and research before investing and trading.

Okay… now to the charts. 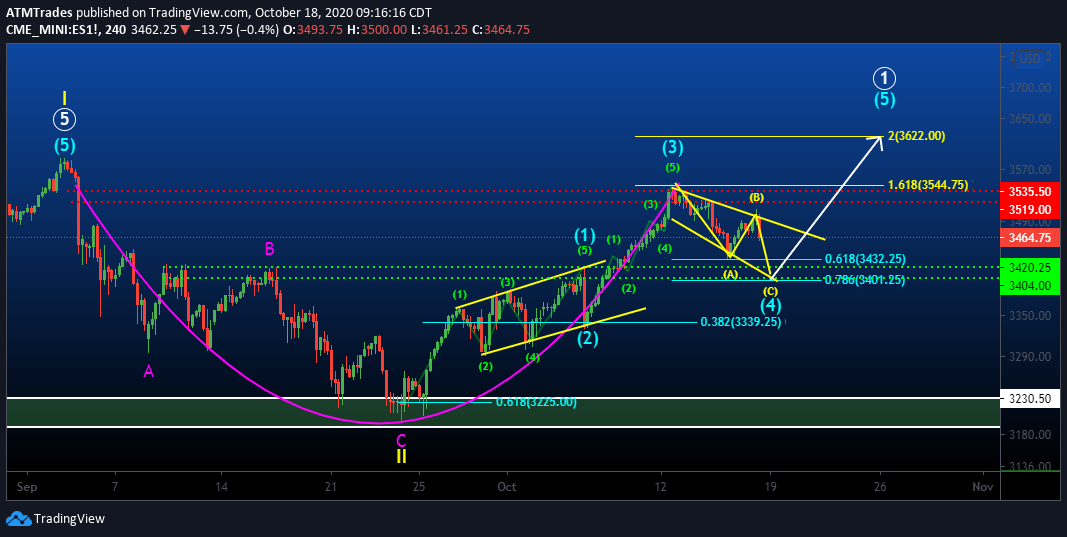 As elections approach, experts are projecting us going up, down, and every way possible… you name it and I’ve seen a prediction on it.

What I’m currently seeing here is a handle beginning to clearly develop, as we just attempted to crack recent ATH’s Monday and were swiftly rejected. A pull back towards $340-$342 is highly likely (completing this corrective count) and where I suggest you prepare for the next bull run. It should push us to new all-time-highs before the election.

The bull case is invalidated on a strong close below $340. 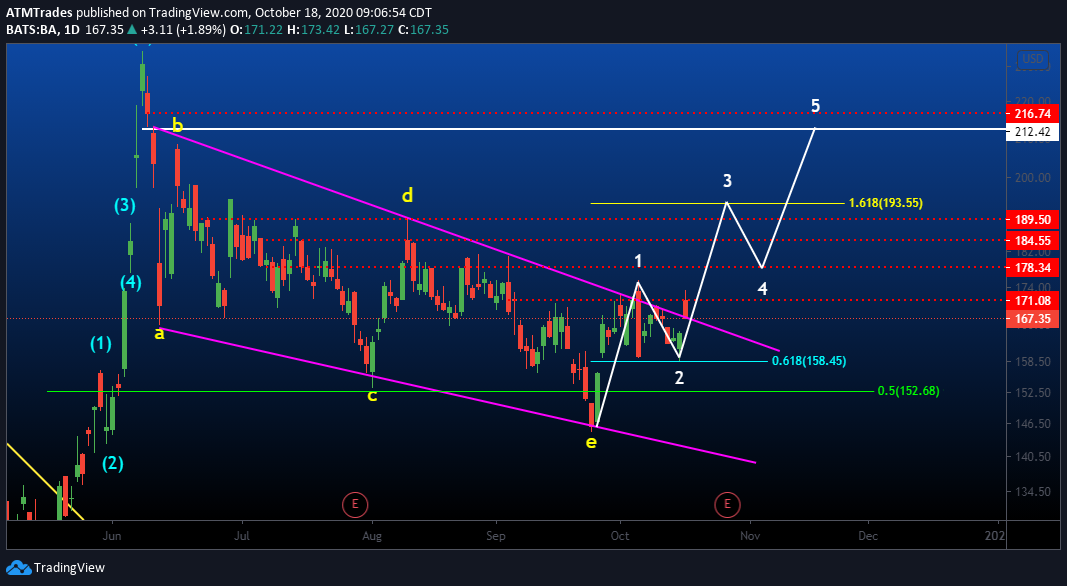 BA has finally broke out of its falling wedge pattern that took months to finish (June-October). What I’m expecting to happen is to see a breakout continuation after a retest of resistance (support on Friday of $167).
We now should be entering wave 3 of 3 (the strongest wave) after the 737 max approval. My projection is possibly $193 once this stock really gets moving and the momentum can be extremely aggressive too.

This long idea invalidates on a close below $163. 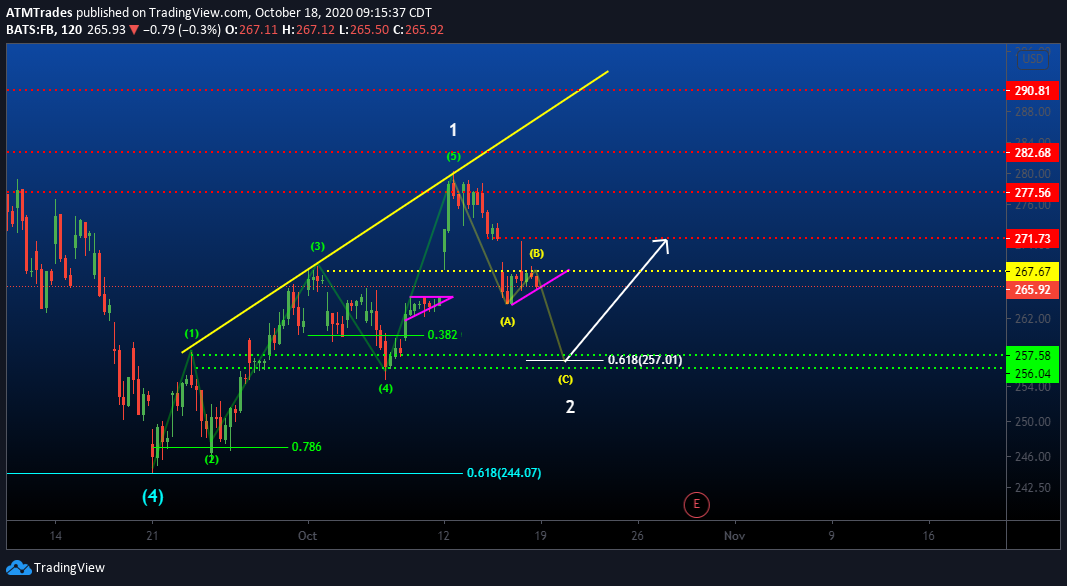 Last week FB completed the first impulse wave up on Monday before seeing a steep correction. That is incomplete by my count. Currently, there is a bull flag forming, so watch for rejection of the $267 level again where you can go short all the way down to the $257 price range. Watch for a breakdown below $263.50 to confirm this short idea.
If you don’t wish to play the bear side, there are 2 potential supports to play here. The $263.50 support level, or the stronger $257 (Daily Demand) level, which is where I project us to go before a strong move higher as we run up into earnings.Bear case: Short upon rejection of $267, or under $265. Bear case confirms under $263

Bull case: Watch for support to confirm at $263, and if that fails target the $257 level to buy before we push higher for ER. 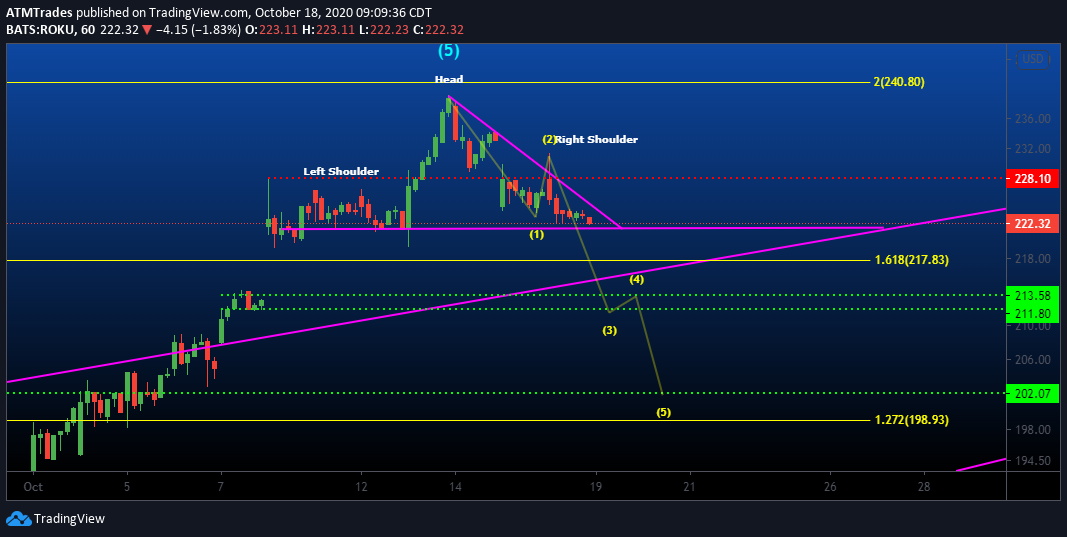 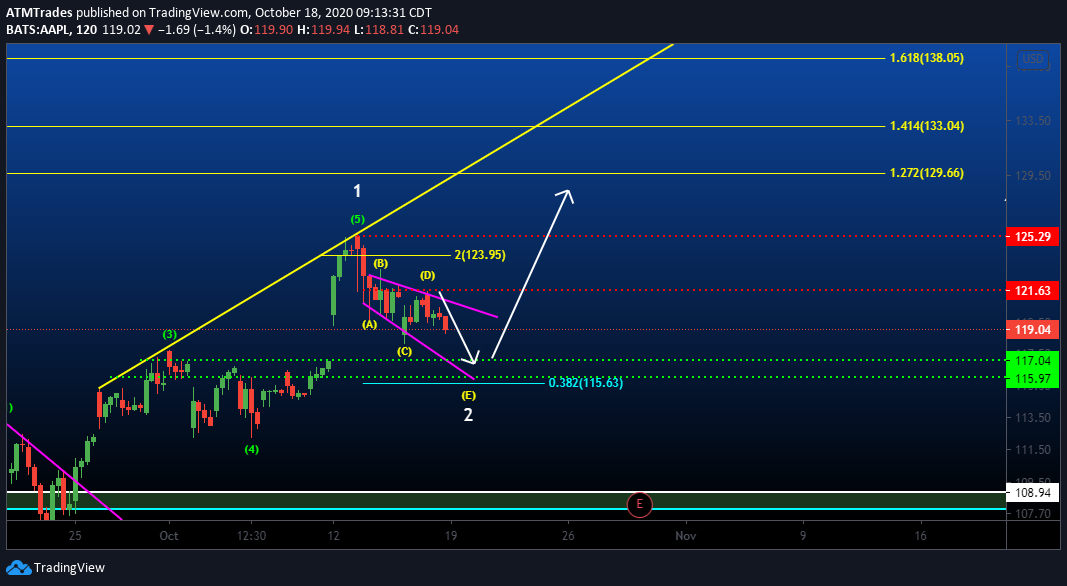 Much like the rest of the market, AAPL topped out at the beginning of the week on the hype from its iPhone release event. Now, I’ll be watching for AAPL to finish this expanding triangle correction down to the daily demand level before resuming higher for a push before earnings.

If you wish to play the bear side, you can short this down to the $117 level into the $115 level. The short invalidates on a close above $120. There is a higher risk to reward ratio on the bull side for AAPL if it can touch the $129.66 level. 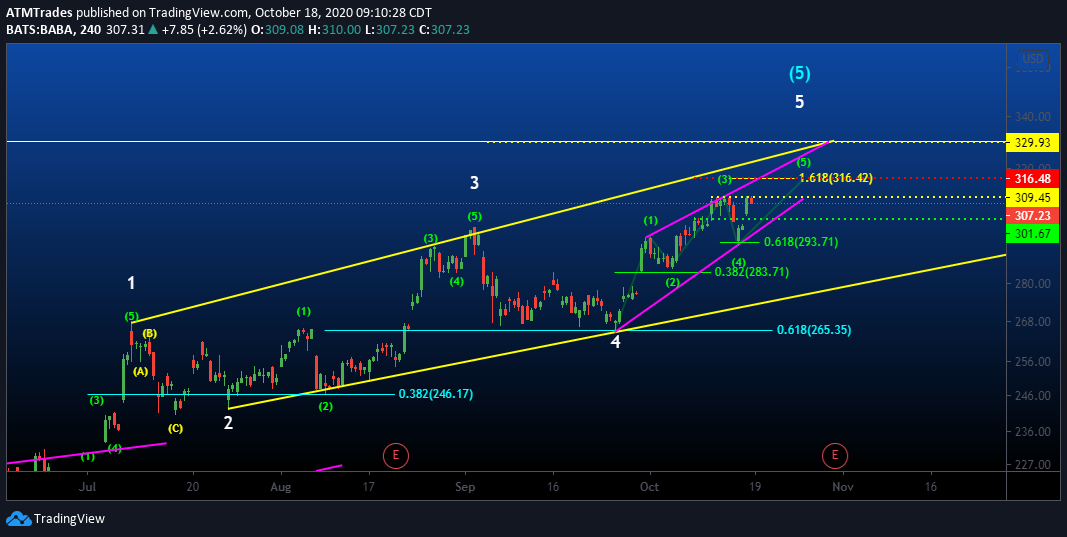 This will be the easiest play guide of the week.

All that needs to be done here is watching for a breakout over the $309-$310 supply zone. If we do get this desired breakout, look for Alibaba to make a potential parabolic move (parabolic = it flies like a rocket upwards) 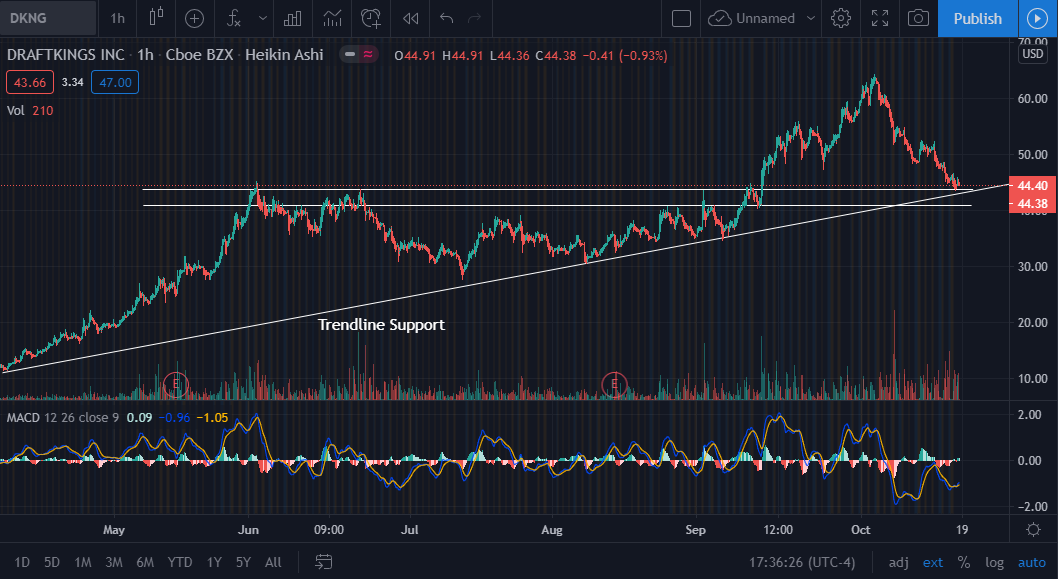 Oct. 05 – Company had a public offering to raise funds (bad) 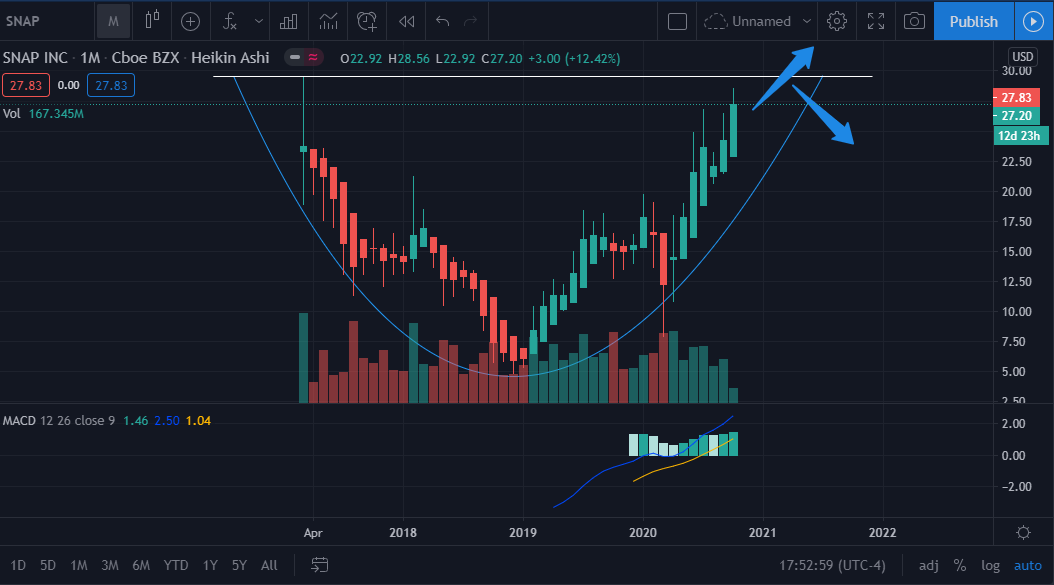 Analysis: SNAP has earnings approaching on Tuesday, so I’ll be watching to see the gap fill to resistance of the cup at $29.44. This will do 2 things: 1) form a handle likely caused by an earnings report or 2) break through the resistance of the cup and make new all-time-highs as it has potential to blow away earnings expectations as it is benefiting from the COVID-19 pandemic.

In this Snapshot you can see a perfect 3 wave setup for a final push into earnings on the 27th of October.

Steps one and two are there and the chart is primed for a move up into earnings.

Next, let’s look at the options flow. On Friday, October 16th,a $18.1 million dollar call option block was purchased for the strike of $230 with an expiration of 12/18/2020. This shows a very aggressive move and bullish call going into earnings.

I am also very interested in NFLX this week for an earnings run-up (they report Tuesday after market close). There was a one million dollar call order that came out on Friday, October 16th for a strike of $565 and expiration of 11/20/2020.

I am looking for a bounce Monday to confirm a bullish move into their earnings report. I could see a move Monday as anywhere from $538 to $548 is possible.

NFLX is currently sitting exactly at a perfect retracement level, which would also support the theory of a bounce on Monday.

UBER update: Once UBER broke under $36.50, which was described as the key level for confirmation of a handle uptrend, the play was voided. That being said, watch it for a reversal off of the $33.55 area and a break above $34.20 to confirm a reversal.

IBM Update: IBM filled the gap and has held the key level of $124.50. I will be watching for a continued move above $127. I now believe IBM is halfway through forming a cup and will continue to watch the formation going forward.